Effective Leadership is Music to My Ears

One of my best friends, someone I’ve known my entire life, is a prominent dentist in Ohio.  As kids we played together, went to school together, played on the same sports teams together; we had many adventures together.  We went to different colleges and chose different career paths.  He earned his DDS and I earned my PhD.  We both raised two children, both having one boy and one girl.  Now we’re both empty nesters and continue to enjoy each other’s friendship.

While in the fourth grade, both of us took piano lessons from Mrs. Watson, the music teacher at our school.  Her house was right across the street from the school which is where she gave piano lessons in her living room.  Our lessons just happened to be on the same day, one right after the other.  When Mrs. Watson realized what great friends we were, she came up with the brilliant idea that we should take our lessons together at the same time.  We were all in!

During one of those lessons, my buddy missed a note while playing.  Mrs. Watson was always eager to provide feedback and instruction, so took this opportunity to ask my lesson-mate the name of the missed note.  He didn’t answer, but instead simply sat on the piano bench in silence.  Finding the silence uncomfortable, I gave him a quick glance.  I immediately recognized the look:  a combination of frustration and anger, covered by a thick layer of stubbornness.  Mrs. Watson was not deterred, reminding my friend that she knew he was playing the sousaphone in the school band whose music was written in bass clef (the same as the now infamous missed note).  We sat there in silence in Mrs. Watson’s living room, the only sound being the ticking of some distant clock, the rest of the lesson.  Mrs. Watson could be stubborn too.  Two stubborn individuals in a stand-off, and one uncomfortable fourth grader observing this historical stand-off, afraid to move or breathe. Not long after that, neither of us were taking piano lessons.  Both of us continued to play musical instruments in the school band, but Mrs. Watson had black-balled us from following in the piano playing footsteps of Ferrante and Teicher! 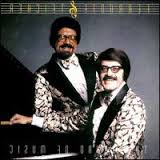 I always chuckle when I reminisce about that fatalistic piano lesson in Mrs. Watson’s living room, and of course, that makes me think about leadership.

One study looked at adults between the ages of 55 and 76 who took music lessons for a minimum of four years as children.  What they found was that regardless as the whether they continued with music or not, there was a clear relationship between those music lessons and language aptitude, hearing, learning ability and memory.  Study participants with 4 to 14 years of music training during their youth scored even higher on those same skills.  Other studies indicate that learning a practicing music, even at advanced years, may help improve listening skills, memory skills and motor skills.

Regardless of what your music education experience may or may not have been as a youth, pick up a musical instrument and start playing or start singing along!  Music will enhance skills that enhance your leadership effectiveness, and that will be music not only to your ears, but to everyone’s ears around you!  Thank you Mrs. Watson!

You can subscribe to Bill Auxier’s weekly newsletter by visiting www.BillAuxier.com.