I’m a little stiff as I tap the keys of my computer today having spent the weekend riding my bike 190 miles.  I participated in the Pan Mass Challenge, a fund-raising bike-a-thon that essentially crosses the state of Massachusetts. The event raises money for the Dana-Farber Cancer Institute through the Jimmy Fund with the goal of funding research to find a cure for cancer.  It raises more money for charity than any other single athletic fundraising event in the country.  100% of every dollar raised by participating riders goes directly to the cause.  From its inception, the Pan Mass Challenge has raised over $400 million dollars.  This year’s goal is to raise $40 million.

The course I rode began Saturday morning in Sturbridge, MA.  110 miles (and several hills) later, we stopped for the day in Bourne.  Sunday, we mounted our bikes once again in Bourne and pedaled another 80 miles to the “end” of Cape Cod in Provincetown.  I rode on a team of 10 riders along with another 5,690 cyclists and nearly as many volunteers who provided support before, during and after the ride.  Each rider on our team committed to raise a minimum of $4,300 each, and so far, we have raised $47,900.  While the event has ended, fund raising continues until October 1. 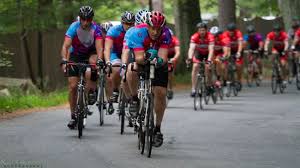 Participating in this event reminded me what effective leadership really is.

One of my favorite definitions of leadership is defining it as the process of others following when they don’t have to.  Billy Starr established the Pan Mass Challenge in 1980, and as stated, raises more money than any other athletic event.  Volunteers who choose to ride and help with the event logistics have made the Pan Mass Challenge the model for athletic fund raising.  Billy Starr provides leadership.

Participating in the Pan Mass Challenge was demanding physically and mentally, but the idea of being part of something bigger was more intense than I had imagined.  The emotional kick in the gut was greater than the physical challenge of riding a bike 190 miles.  People in all shapes and sizes were riding; some were cancer survivors while others were honoring loved ones whose lives were cut short.  Many riders and spectators alike had pictures of cancer survivors and those who had lost their lives to cancer.  I will forever remember riding by a very large man, quite larger than someone you would expect to be riding a bike 190 miles, who had a piece of paper pinned to the back of his cycling jersey.  On the paper was the picture of a young man, and across the top of the page were the words, “For my Son.”  My eyes filled with tears when I realized why he was riding.  This dad, and many others, came together with various skill levels for one purpose.  Some participants were avid cyclists, some were weekend warriors, and some had minimal cycling experience.  Regardless of their physical condition, they rode their bikes with an emotional commitment that in some cases exceeded their physical ability, to help others, to join an effort much larger than themselves.  Cancer is this great disease of mystery that sometimes ends life prematurely and sometimes is miraculously overcome.  Life style decisions sometimes affects getting cancer, sometimes it doesn’t.  Riding a bike doesn’t cure cancer, but raising money for research may.  Solving the mystery of cancer has value and is “something bigger.”

Every participant rode because they volunteered to ride, not because they were forced to.  Having individuals engaged in something bigger than themselves because they want to be engaged; isn’t that what effective leadership is all about?

To subscribe to Bill’s weekly newsletter, go to www.BillAuxier.com.