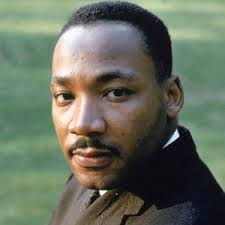 One of my heroes is Martin Luther King, Jr.  I remember sitting in the living room and watching him on our little black and white television.  His fiery rhetoric, his compassion and his choice of words were like getting an extra piece of candy for my ears.  I loved his message and his delivery.  I was too young at the time to truly understand everything that was going on, but as I grew and matured, his message stuck with me, long beyond his shortened life.

Martin Luther King, Jr., was a leader who inspired millions.

Here are some of my favorite quotes from Martin Luther King, Jr. 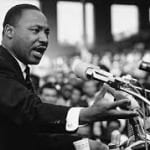 “These are revolutionary times; all over the globe men are revolting against old systems of exploitation and oppression.  The shirtless and barefoot people of the world are rising up as never before.  The people that walked in darkness have seen a great light….  We must move past indecision to action….  If we do not act, we shall surely be dragged down the long, dark, and shameful corridors of time reserved for those who possess power without compassion, might without morality and strength without sight.”

“People are often led to causes and often become committed to great ideas through persons who personify those ideas.  They have to find the embodiment of the idea in flesh and blood in order to commit themselves to it.”

“I had decided I should not sit back and watch, but should lead them back to the buses myself.”

“Our aim is to persuade.”

“Along the way of life, someone must have sense enough and morality enough to cut off the chain of hate and evil.  The greatest way to do that is through love.”

“When we go into action and confront our adversaries, we must be as armed with knowledge as they.”

“In order to love your enemies, you must begin by analyzing yourself.”

“A leader has to be concerned with semantics.”

“We must have slogans during any revolution in order to fire people, motivate them, and get them moving.”

“If America is to remain a first-class nation, it cannot have a second-class citizenship.”

“Any real change in the status quo depends on continued creative action to sharpen the conscience of the nation and establish a climate in which even the most recalcitrant elements are forced to admit that change is necessary.”

“We can differ and still unite around common goals.”

“Ultimately, a genuine leader is not a searcher for consensus, but a molder of consensus.  I would rather be a man of conviction than a man of conformity.”

“There comes a time when one must take the position that it is neither safe nor politic nor popular, but he must do it because his conscience tells him it is right.”

“No work is insignificant.  If a man is called a street sweeper, should seep streets even as Michelangelo painted, or Beethoven composed music, or Shakespeare wrote poetry.  He should sweep streets so well that all the host of heaven and earth will pause to say, ‘Here lived a great street sweeper who did his job well.’”

“We shall have to create leaders who embody virtues we can respect, who have moral and ethical principles we can applaud with an enthusiasm that enables us to rally support for them based on confidence and trust.  We will have to demand high standards and give consistent, loyal support to those who merit it.”

“The soft-minded man always fears change.  He feels security in the status quo, and he has an almost morbid fear of the new.  For him, the greatest pain is the pain of a new idea.”

“The essence of man is found in freedom.”

“The people are looking to me for leadership—and if I stand before them without strength and courage, they too will falter.”

“The time is always right to do what is right.”

“History will have to record that the greatest tragedy of this period … was not th strident clamor of the bad people, but the appalling silence of the good people.”

“Love is the only force capable of transforming an enemy to a friend.”

“The quality, not the longevity, of one’s life is what is important.”

“Every person must decide whether to walk in the light of creative altruism or in the darkness of destructive selfishness.  This is the judgment.  Life’s more persistent and urgent question is, what are you doing for others?”

“I have a dream that one day on the red hills of Georgia, sons of former slaves and sons of fomer slave-owners will be able to sit down together at the table of brotherhood….  I have a dream my four little children will one day live in a nation where they will not be judged by the color of their skin but by the content of their charter.  I have a dream today!”

“I still have a dream.  It is a dream deeply rooted in the American dream.  I have a dream that one day this nation will rise up and live out the true meaning of its creed:  ‘We hold these truths to be self-evident, that all men are created equal.’”

“Like anybody, I would like to live a long life.  Longevity has its place.  But I’m not concerned about that now.  I just want to do God’s will.  And He’s allowed me to go up to the mountain.  And I’ve looked over.  And I’ve seen the Promised Land!  I may not get there with you.  But I want you to know tonight, that we, as a people, will get to the Promised Land!  And so I’m happy tonight.  I’m not worried about anything.  I’m not fearing any man!  Mine eyes have seen the glory of the coining of the Lord!”