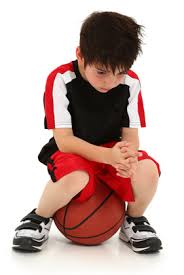 I started kindergarten when I was four years old. I started college when I was 17 years old. No, I was not a child prodigy with great intellectual capacity, I was simply born in November. As a result, I was always the youngest in my class. On top of that, my body didn’t seem to grow and develop as fast as my classmates. In grade school, I was always slower, less coordinated and less physical than the other boys. Sometimes our teachers would have us play softball or some other game and have two students choose teams. I was usually the last boy picked. Sometimes the team captains even picked a girl before me (a politically incorrect statement today, but a reality of my culture of youth)! The one thing I learned at an early age is, getting picked last sucks!

In high school things changed. My body started catching up with the other boys and I not only made teams, I was even a starter in football and baseball. Finally! At last! All was good in the world! Thank goodness I hadn’t given up, but instead, persevered to achieve my dream of making a team!

One of my all-time favorite movies is Rudy, the story of an underachiever whose dream was to attend the University of Notre Dame AND play football there. It’s an incredible true story of an underdog seeking greatness, a story so incredible they made a movie about it! It is easy to empathize with Rudy during his struggles and cheer him on. The one thing Rudy possessed more than anything else was perseverance. Nothing was going to stand in the way of his achieving his dream. Perseverance helped him overcome what seemed like an infinite number of challenges. Perseverance is one trait that makes exceptional leaders stand out from the crowd. Perseverance separates the winners from the losers in life.

Dr. Jean Wiecha at the University of Massachusetts has concluded that the biggest predictor of success is perseverance. According to Dr. Wiecha, regular physical activity is the most effective way to establish perseverance. Every time you work out, you reinforce a mindset of perseverance that transfers to other aspects of your life.

Effective leaders need to have perseverance, and they also need to help others learn or develop perseverance. Here is a checklist I have created on things leaders can do to reinforce their own perseverance while simultaneously encouraging the habit of perseverance in others:

One of my heroes, Abraham Lincoln, wrote the book on perseverance. As a businessman, Lincoln failed twice. As a politician, he lost eight elections. His mother died when he was nine years old, his first love, Ann Rutledge, died at the age of 22, and two of his four children died during his lifetime. In his youth, until the age of 21, his father had him work for others and kept all the money for himself. He was mocked in the press for being ugly, uneducated and ignorant. Yet, through perseverance, he is considered one of the greatest, if not the greatest presidents in American history. That’s one of the reasons I love this quote:

“Adhere to your purpose and you will soon feel as well as you ever did. On the contrary, if you falter, and give up, you will lose the power of keeping any resolution, and will regret it all your life.”
— Abraham Lincoln

And on a lighter note, a quote from a favorite comedian:

“Thankfully, perseverance is a good substitute for talent.”
— Steve Martin

Effective leaders persevere and inspire others do the same.

To subscribe to Bill’s weekly newsletter, go to billauxier.byteplate.com.